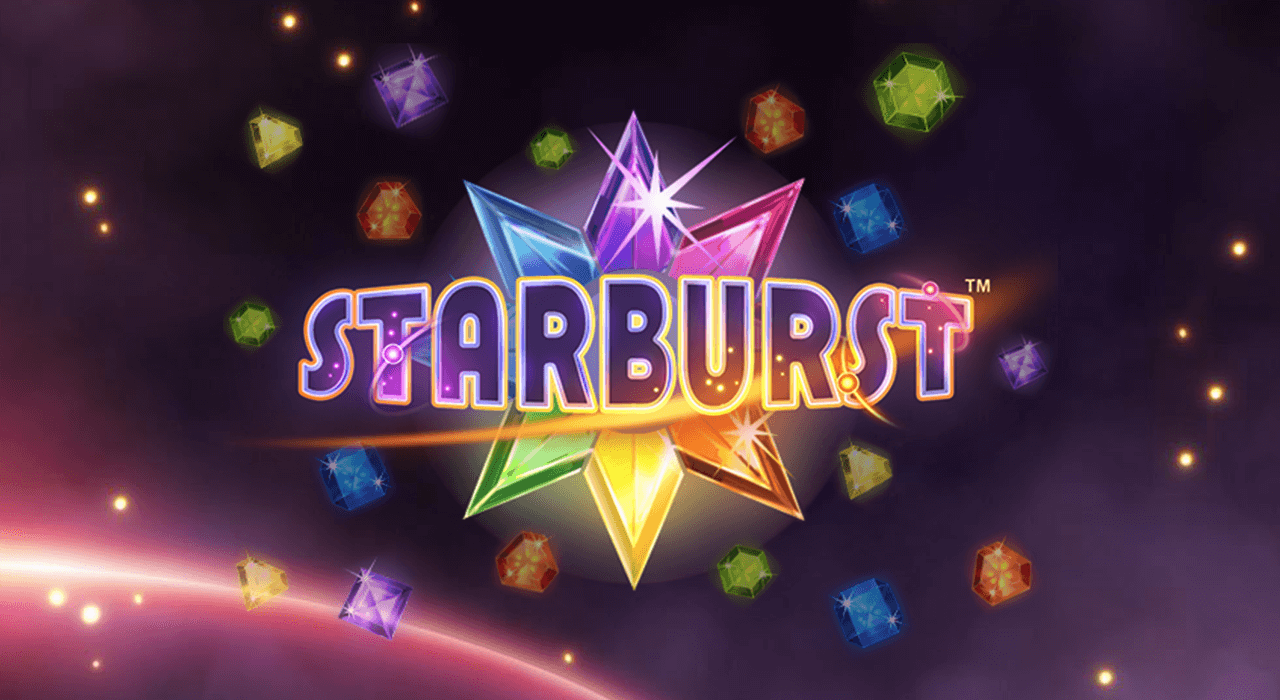 Starburst slot considered by most people in the gaming community as one of the most popular games of all time, and also as one of the most innovative and stunning games ever. If there is one game everybody loves, Starburst must be it. Somebody once said, “There are good slots, there are great slots, and then there is Starburst”. We think it pretty much sums it up.

You have everything here, plain and simple. The beautiful visual, the cosmic theme, the vibrant colors, the dazzling jewels, the music and the video effects, the fast pace – you only need a few spins to get addicted.

Five Jewels – blue, purple, yellow, orange, and green, standard ‘seven’ and ‘bar’ symbols, and the Starburst symbol as a Wild – that’s all you have. It is a 5-reels slot, with a total of 10 paylines, but actually it’s 20 paylines, because of the amazing Win Both Ways feature.

The feature means, that you win not only when the combination appears left-to-right, but also right-to-left! This one makes Starburst somewhat unique, because on most slots, after the first two reels have landed, you know whether you have won or lost. So if the first two reels land and you don’t win, the spin is made redundant. On Starburst, because you can win from right to left too, that never happens, so you are engaged in the spin right until the last two reels finish spinning.

The feature also turns Starburst into a slot with very generous payouts, which tend to occur more often than average. But no slot can be without their weaknesses. In Starbust if you have one – it’s in the lack of bonus features.

Aside from Win Both Ways feature, which cannot be considered as a bonus feature, because it’s such an integral part of the game, you only have Starbust Wilds bonus round. The feature is activated, when a Wild symbol appear on the middle three reels. When this happens, it expand to cover the entire reel, and the non-middle reels will re-spin. If an additional Wild appears during the re-spin, you will be awarded with another re-spin, and so it goes, until 5 re-spins, which is the maximum for this feature.

All this means, of course, that you can accumulate some significant winning, if you have a decent bonus round. But that’s it – this game don’t have a ‘free spins’ bonus or a multiplier feature, typical to most other slots. It’s as simple as that. You do have some ‘technical’ features, such as Autoplay, which means you can set the reels spin without having to click your mouse or press any buttons, or the Skill Stop feature, which allows you to manually stop the reels with a single click of your mouse, but those features are not having any effect to the volatility of the game.

Should I Play Starburst Slot in NJ?

Because of this unique feature, you have more payouts, decent sized and small ones. The feature also makes the game more interesting and appealing to players, novice and expert alike.

Like we said before, the simplicity of this slot is everything. The graphic is superb, the sounds capture the excitement of the game, the pace is addictive, and the symbols are dazzling and perfect.

What’s not – the lack of bonus features.

No free spins round or other bonus games most players are used to in other slots, can maybe make Starburst less appealing to fans, who enjoy games with lots of added features.

This website uses cookies to improve your experience while you navigate through the website. Out of these, the cookies that are categorized as necessary are stored on your browser as they are essential for the working of basic functionalities of the website. We also use third-party cookies that help us analyze and understand how you use this website. These cookies will be stored in your browser only with your consent. You also have the option to opt-out of these cookies. But opting out of some of these cookies may affect your browsing experience.
Necessary Always Enabled
Necessary cookies are absolutely essential for the website to function properly. This category only includes cookies that ensures basic functionalities and security features of the website. These cookies do not store any personal information.
Functional
Functional cookies help to perform certain functionalities like sharing the content of the website on social media platforms, collect feedbacks, and other third-party features.
Performance
Performance cookies are used to understand and analyze the key performance indexes of the website which helps in delivering a better user experience for the visitors.
Analytics
Analytical cookies are used to understand how visitors interact with the website. These cookies help provide information on metrics the number of visitors, bounce rate, traffic source, etc.
Advertisement
Advertisement cookies are used to provide visitors with relevant ads and marketing campaigns. These cookies track visitors across websites and collect information to provide customized ads.
Others
Other uncategorized cookies are those that are being analyzed and have not been classified into a category as yet.
SAVE & ACCEPT
Age Verification You must be 21 years old to enter
Sorry You need to be at least 21 to visit out website